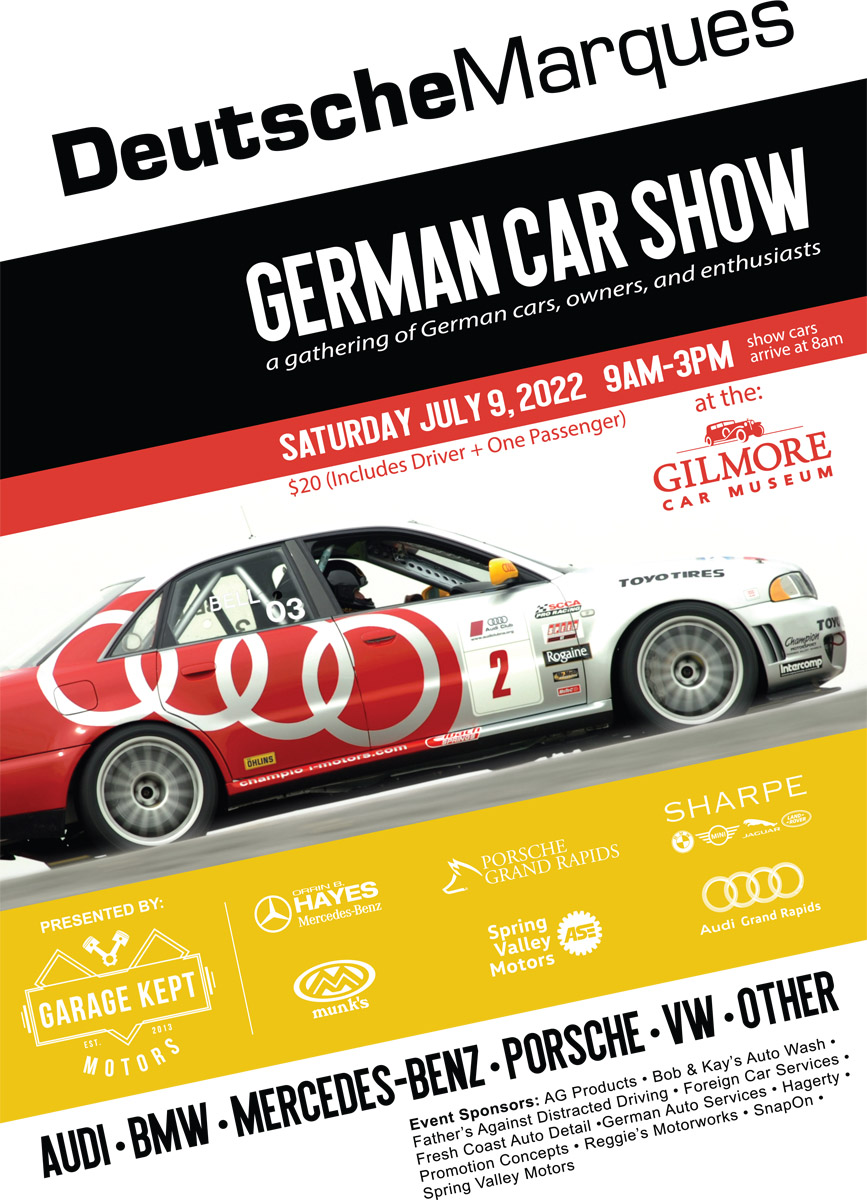 Bring your friends and family out to the Gilmore Car Museum as we being a weekend of “foreign invasions,” beginning with the 10th annual Deutsche Marques, an ALL German Auto Event! This car show will feature all of you favorite German marques and everything from daily drivers to weekend treasures, including BMW, Audi, Porsche, Mercedes-Benz, and Volkswagen. ALL YEARS WELCOME! Once again, Munk’s Motors is proud to be the exclusive VW marque sponsor.

For more information regarding the German Auto Show at the Gilmore Car Museum, please contact Pete Hamlett with the Deutsche Marques Club at 586-212-8449, or visit www.deutschemarquesag.com or visit the Club on Facebook.

General Museum Admission:
10 and under free
Adult/ Senior – $16 general admission
11- 17 Years – $11
Active military is free – including in a show car
(No discounts for vets or seniors)

Porsches in the Park 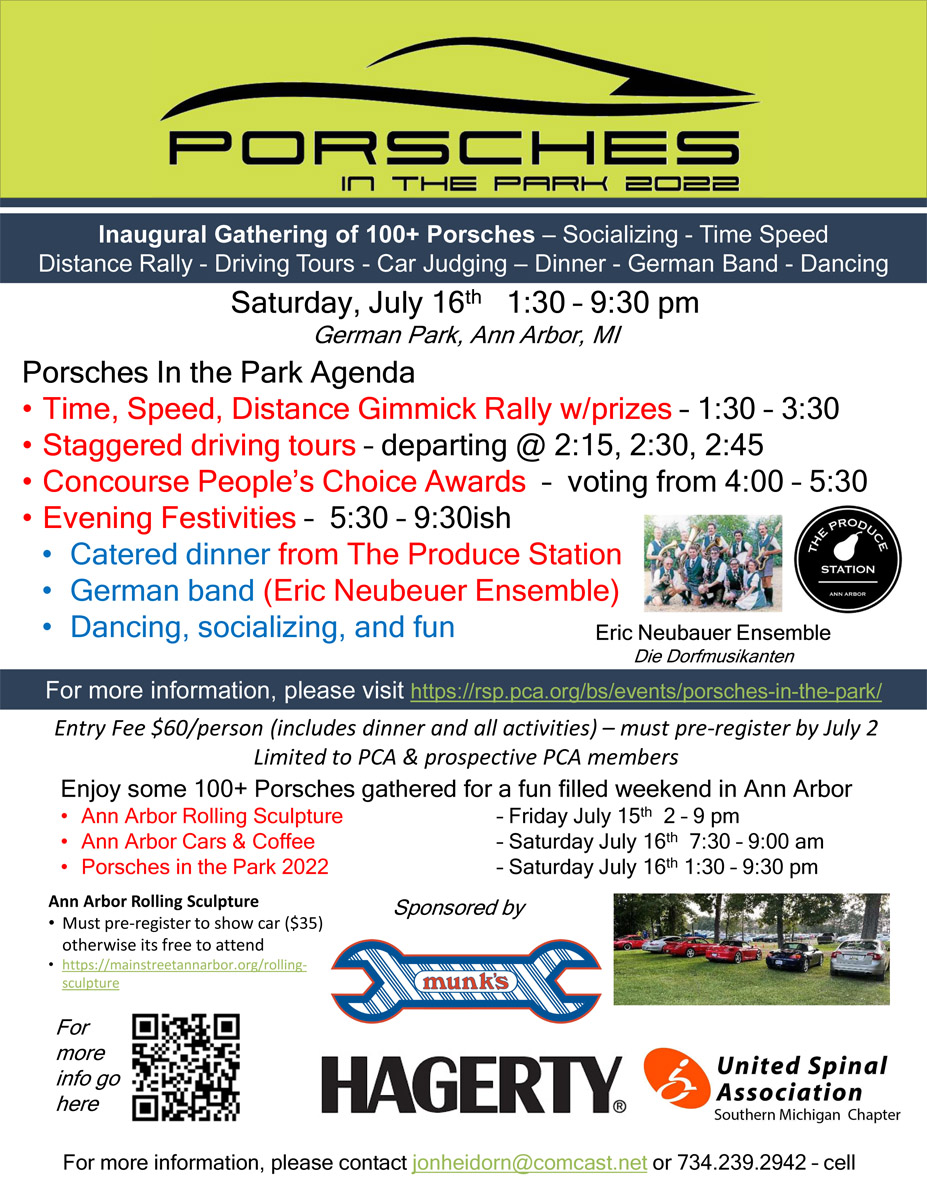 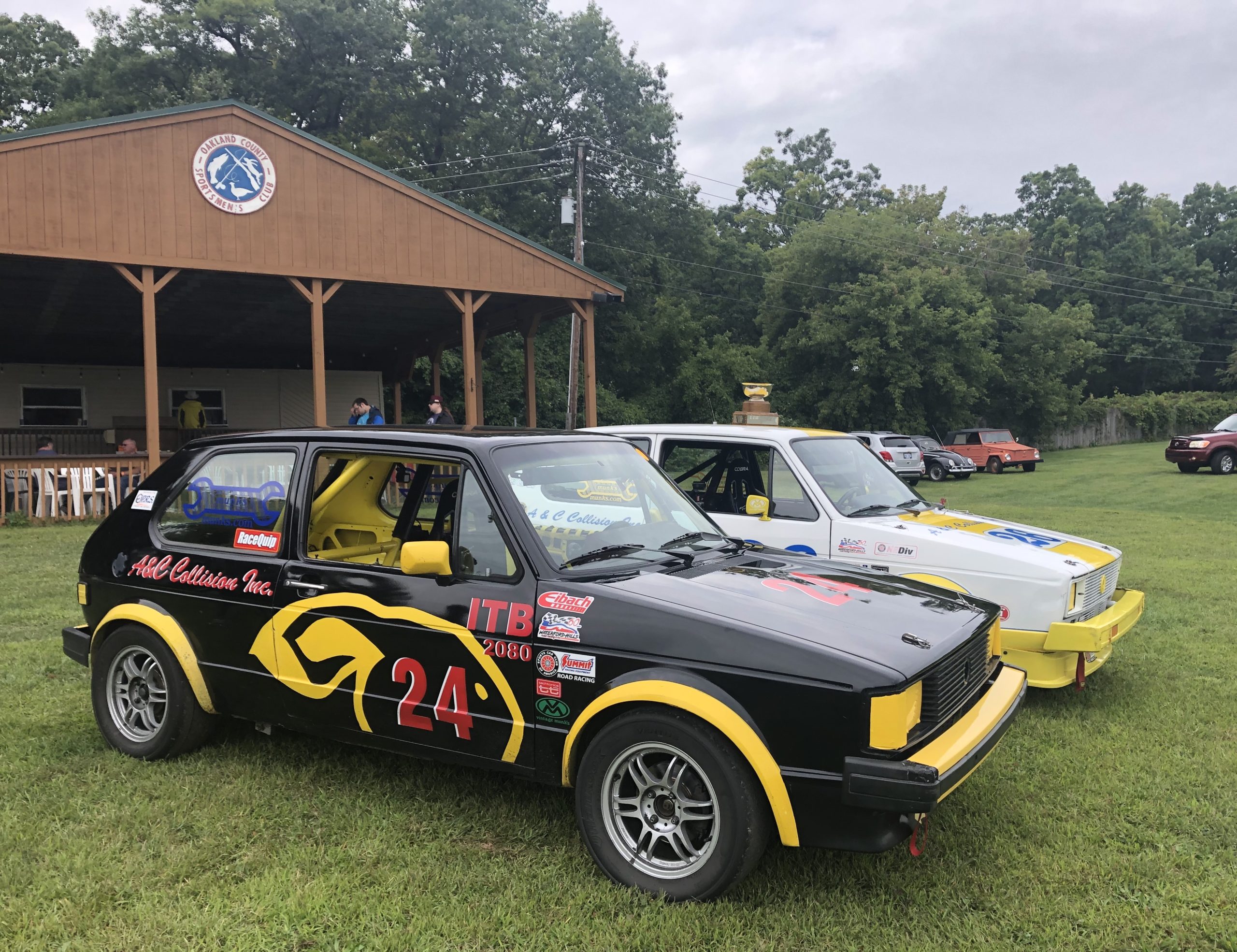 My 928 S-4 is really frustrating me lately. I love it, but I am starting to hate it too. This past winter I installed a powder coated intake manifold because the old one was looking shabby. When I got the car out I noticed unpleasant changes. It idled a little roughly and it slammed into each gear on the up shift (it’s an automatic). Changing the transmission fluid made no difference.

Even worse, after I have driven the car for 10 to 15 miles on the freeway and parked it, if I try to drive it after sitting for 30 to 60 minutes, it will start, run fine for about 50 to 100 feet but then die! It will start right back up, idle barely and take no throttle until it goes through a succession stalls, restarts and idle fluctuations. The first time it happened I thought I was going to get creamed by oncoming traffic. So now I don’t like the way it drives and it scares me as well. Help me please, before I sell it. I can’t drive it anymore. –Daniel

Answer – I once had similarly frightening experiences in one of my project cars. When you can’t rely on your car to keep you safe, you can’t enjoy it. That quirky cutting out problem might be tough to find, so let’s tackle the shifting first. A common problem that can cause poor shift quality is low or contaminated transmission fluid, so changing it was excellent preventative maintenance. However that did not cure it, so you need to dig deeper into what controls shifting.

Your automatic transmission has a component known as the vacuum modulator. It gives the transmission feedback from the engine to determine the speed and intensity of the shift. The greater the vacuum signal (low throttle pressure) the smoother it will shift, the less vacuum signal (as in wide open throttle) the harder it will shift. Modern cars’ shifting is controlled via computers, but your 928 was designed in the 70’s.

The modulator can fail by leaking or by getting stuck. If it leaks, it can feed automatic transmission fluid into the intake and your car will smoke. You are not getting any smoke, so it may be seized or have lost the signal from the engine.

To determine if you have a problem with the modulator get under the car, remove the hose, have your assistant press on the brakes and start the engine to see if you can measure vacuum at the modulator hose. If you can, you probably need a new modulator. If you do not detect vacuum, shut the motor off, get back under the hood of the car and check under the intake manifold where there is a vacuum port which you cannot easily see. You will need a mirror and a strong light, two tools that you already have in your arsenal if you work on your own 928. If you find that hose has come off the nipple where it connects to the engine, you have found the culprit.

When you have a vacuum leak at that location, you will get rough idle, that slamming sensation in gears and your fuel pressure regulator will be inoperative in the “full load enrichment” mode. If you are really lucky this could have something to do with that hot running issue as well.

For the cutting out, rough idle and stalling when hot, my first suspicion is a phenomenon known as “vapor lock.” This is very common in carbureted cars but rare in fuel injected cars. Fuel pressure is maintained in the injection system through a series of check valves. In addition, fuel pressure regulators frequently fail and, rarely, an injector may fail. Check valves fail intermittently and this can drive you crazy while you are trying to diagnose them. Most fuel injected cars have numerous check valves. I once had a car that would act just like yours every 20th start or so. On a hunch I changed the check valve; they are cheap and easy to change. Still, the car failed occasionally. It was so bad that I added a micro switch to energize the cold start valve when it happened in order to start the doggone thing! As crazy as it sounds, it got worse and I discovered that the NEW check valve was defective. After replacement, the car started perfectly for the next five years.

The way we finally caught the symptom in the act was by temporarily installing a fuel pressure gauge on the fuel lines with the gauge taped to the outside of the windshield where I could view it in failure mode. Since then, I install fuel pressure gauges early in the process and I don’t remove them until I have had ten solid test starts in a row with no failures.

So this might take a while. And since you do not want a car you can’t rely on, be prepared for a series of long test drives and test starts. I will dig deeper into this for you and by the next issue; I hope to have the answer. –MC